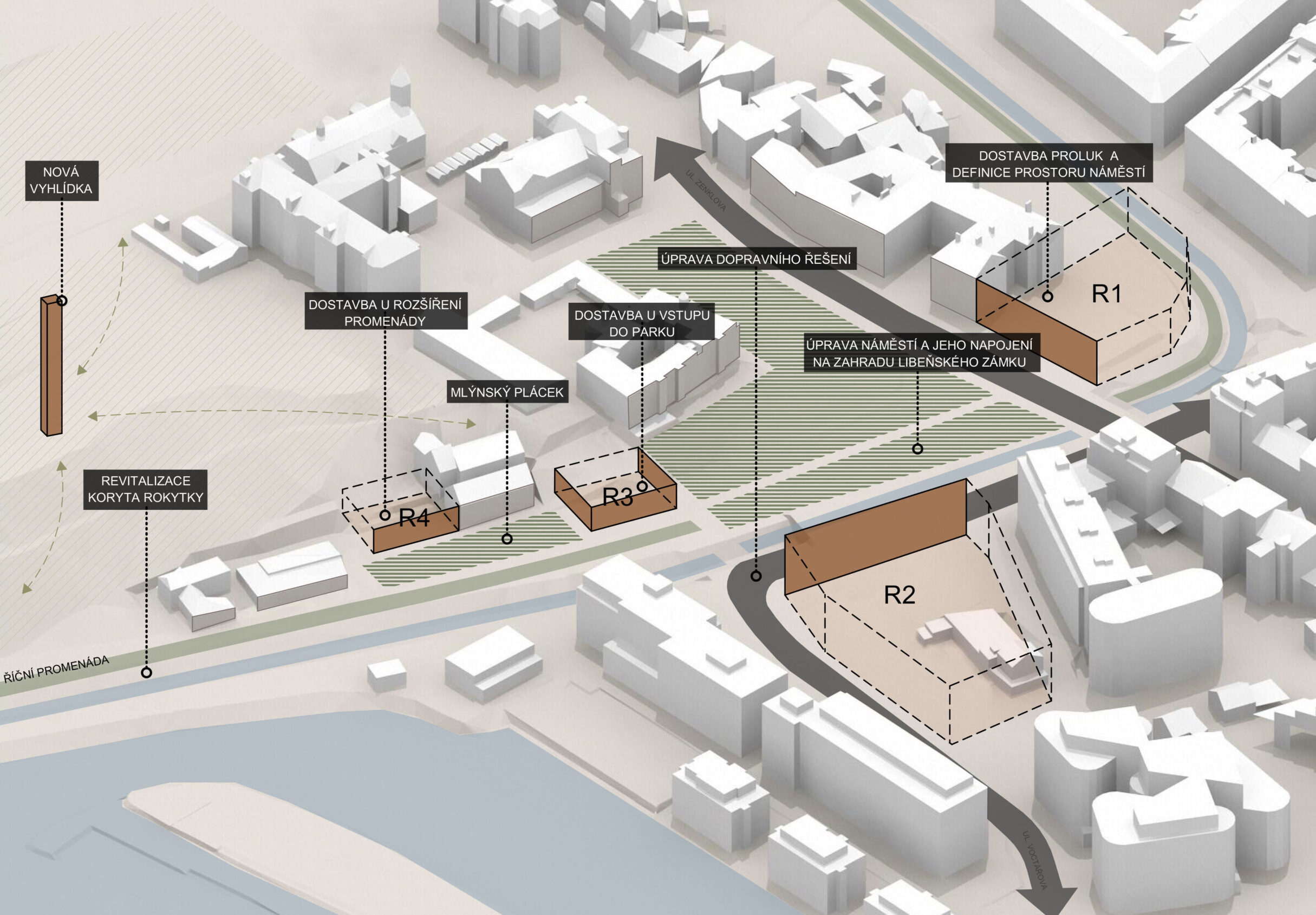 The study deals with a diverse area at the edge of historic Libeň district in Prague defined by the Vltava River, the significant rugged terrain and important transport structures passing through it.

Several investment projects are already being prepared in the area and its surroundings. The ambition of this study is to provide the site with a concept and coordinate all future projects to create the preconditions for the transformation of development areas and public spaces into a vibrant urban district, following not only the urban fabric of historic Libeň, but the wider city center as well.

In order to create an attractive and lively city district, we define several urban principles that will allow the creation of a modern and pleasant neighborhood with the possibility of a campus of public amenities. The study verifies the material and spatial possibilities of the territory, defines the basic rules for public spaces, important spatial connections and penetrations and defines the areas for new development.

Modification of the transport solution, highlighting of the Rokytka river in the place of the square and connection of the square area to the garden of Libeň Castle and Thomayerovy sady park will help to make it more attractive and permeable. It will also create a new center of gravity of the locality. Completion of the gaps, restoration of the currently dilapidated historic buildings and finding their appropriate functional use will lead to the creation of a culturally public center. The buildings around Mlýnský plácek can be used, for example, as a gallery space and a renovated brewery with a restaurant. Buildings in direct connection to Elsnicovo Square, for example, as spaces for an elementary art school, community center or library. The primary school can be expanded to the south by adding a gap, which would provide the necessary capacity. 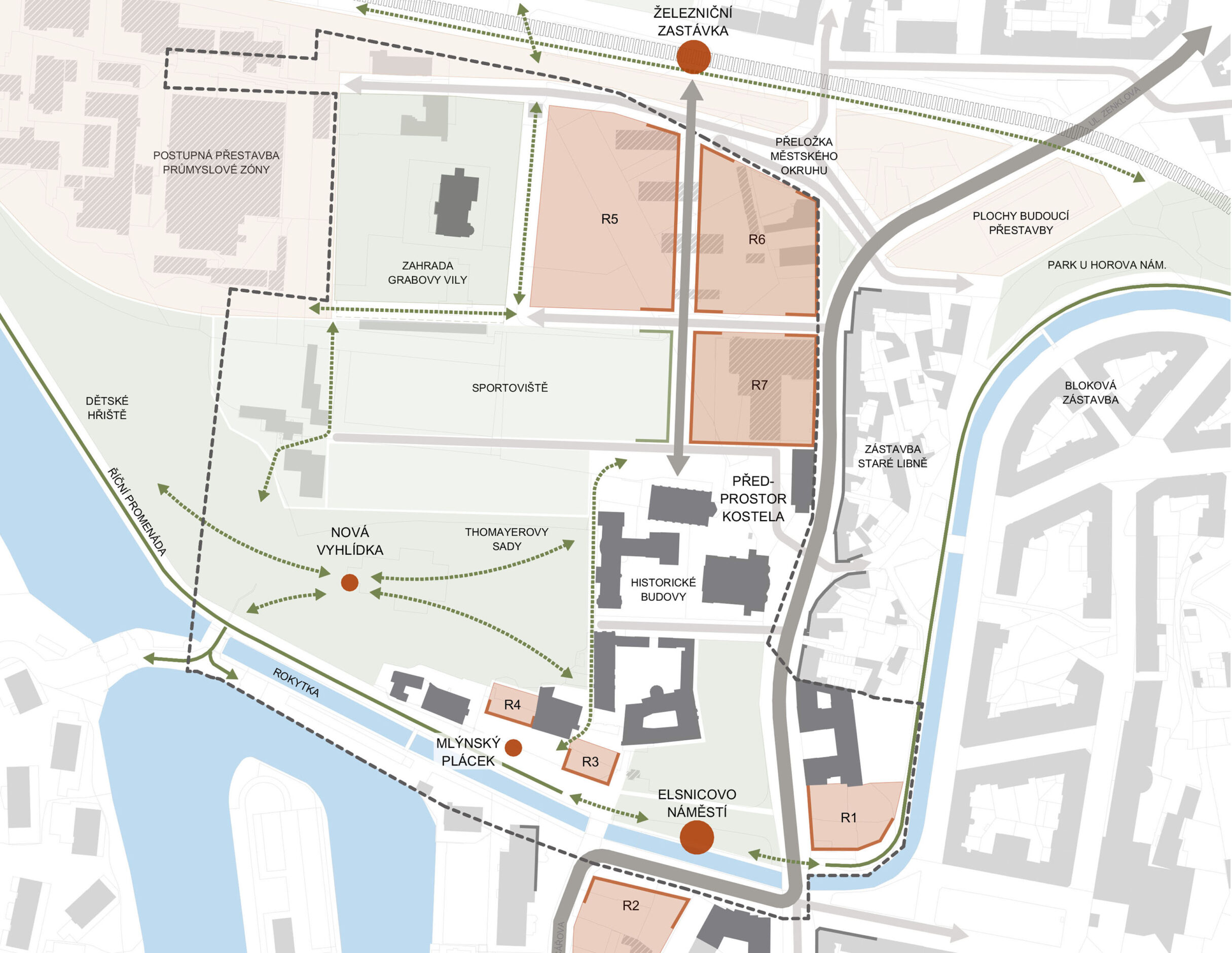 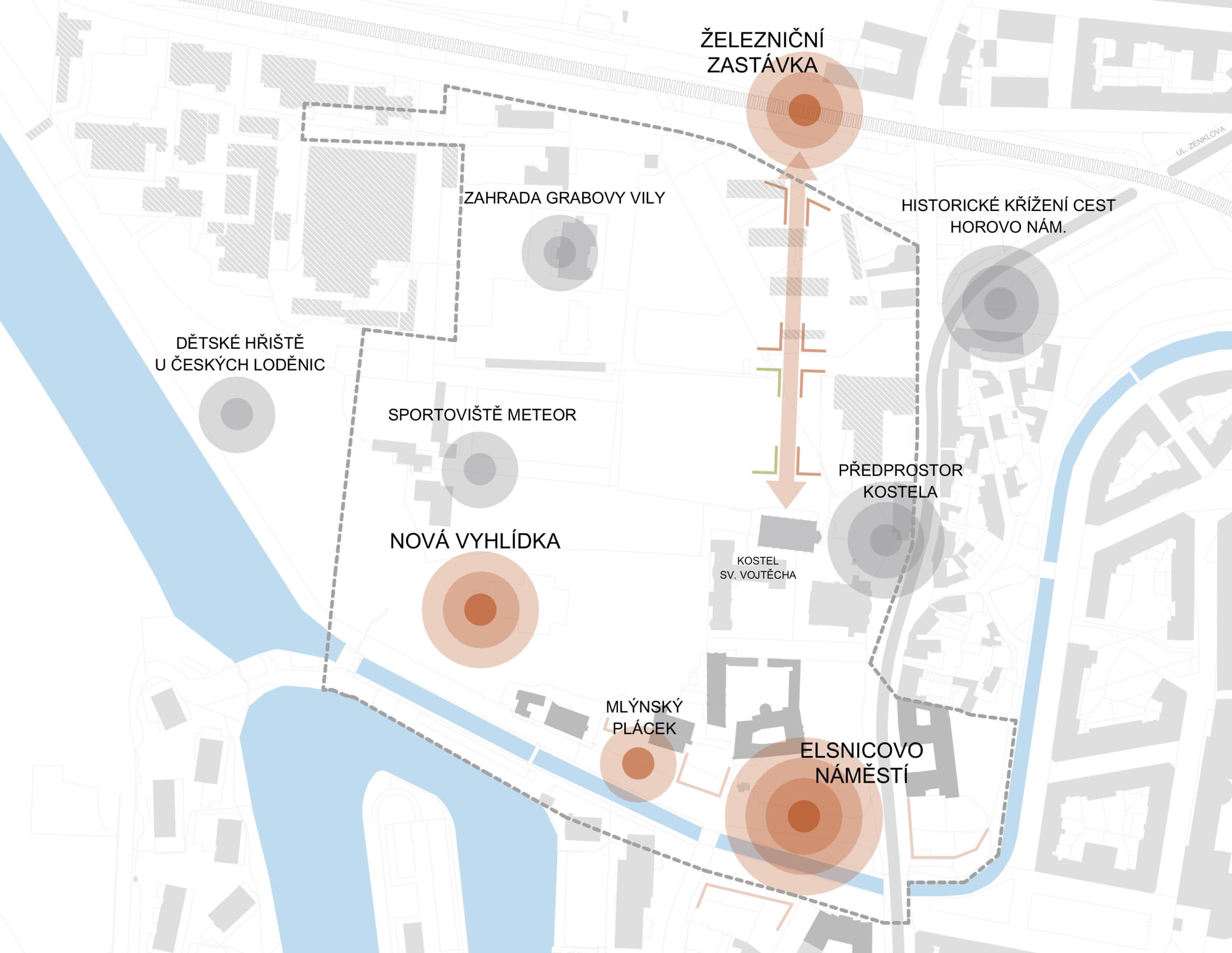 The basis of each district should be a sophisticated network of public spaces. Each square, park or plot should have its own distinctive, memorable character and place in the hierarchy of the whole, which guarantees good orientation in the locality. A vibrant city is safe, economical and contributes significantly to the quality of life of its inhabitants. The aim of the proposal is to create places that will encourage spending leisure time in the area. We propose to transform Elsnicovo Square into an attractive space, making it a lively center of city-wide significance. We are also supplementing it with places of smaller scales, such as Mlýnský plácek or a new viewpoint in Thomayerovy sady park. In the northern part of the area we insert a new axis, composed from the church of St. Vojtěch to the new railway station, which forms the new main road in this development area. The planned railway station will become an important point and change the dynamics of the whole area.

The Elsnicovo Square - currently a space affected on all sides by traffic, an impassable and unadapted space for pedestrians, is proposed to turn into an attractive square, making it a lively center of city-wide significance. We propose to move the road for car traffic to the south side of the square along the Palace Svět building, thus freeing up the park area in front of the chateau and connecting it with the square. This will also provide more space for the Rokytka riverbed and make it accessible to people. 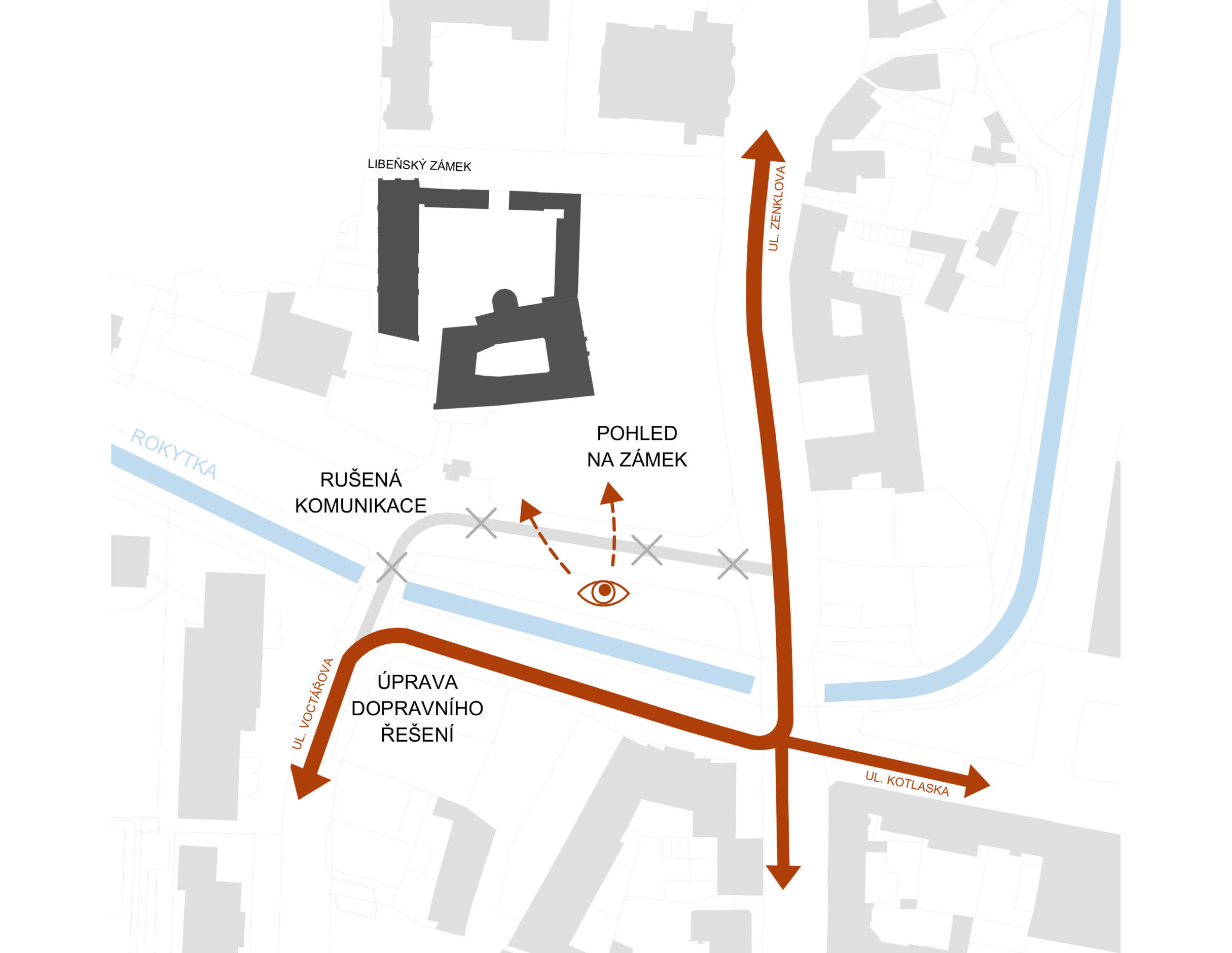 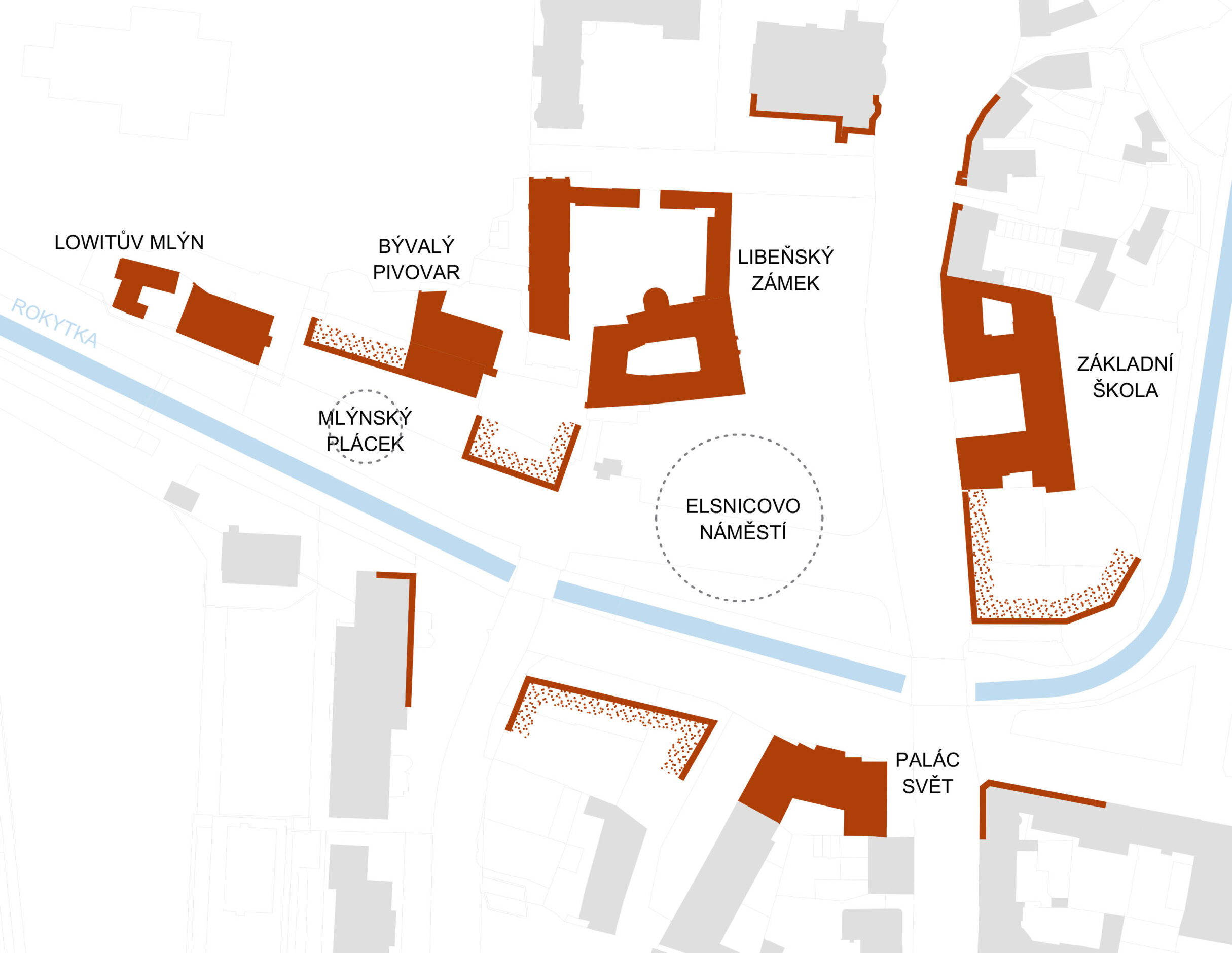 The preserved part of Stará Libeň fills the place with unique Genius loci. The proposal treats the place with history and respect and tries to incorporate the existing buildings into the life of the city. We suggest filling them with the appropriate function and bring life back to currently decaying and disused objects. To define the main street and public spaces and to define the boundary between private and public space, we propose the creation of solid edges of building blocks by completing currently empty plots and thus clearly define the area of ​​Elsnicovo Square. The surroundings of the square will be transformed into a public cultural campus, which will represent the city district, in which there will be a number of shops and services. It will become a pleasant place to spend free time. The completion of the building south of Libeň Castle, which would not compete with the castle building, but would complement the historic buildings of the mill and brewery is intended. It will help to define not only the square itself, but to create an entrance to the park and the new Mill Square.

The location of the district in direct connection with the Rokytka River, Thomayerovy sady park, the Pod Korábem park and the garden at Grabova vila provide a unique access to the existing greenery. The proposal seeks to strengthen and develop these advantages. By adding new and supporting the existing pedestrian crossings, the individual areas will be interconnected and the green infrastructure will become a natural part of the area. 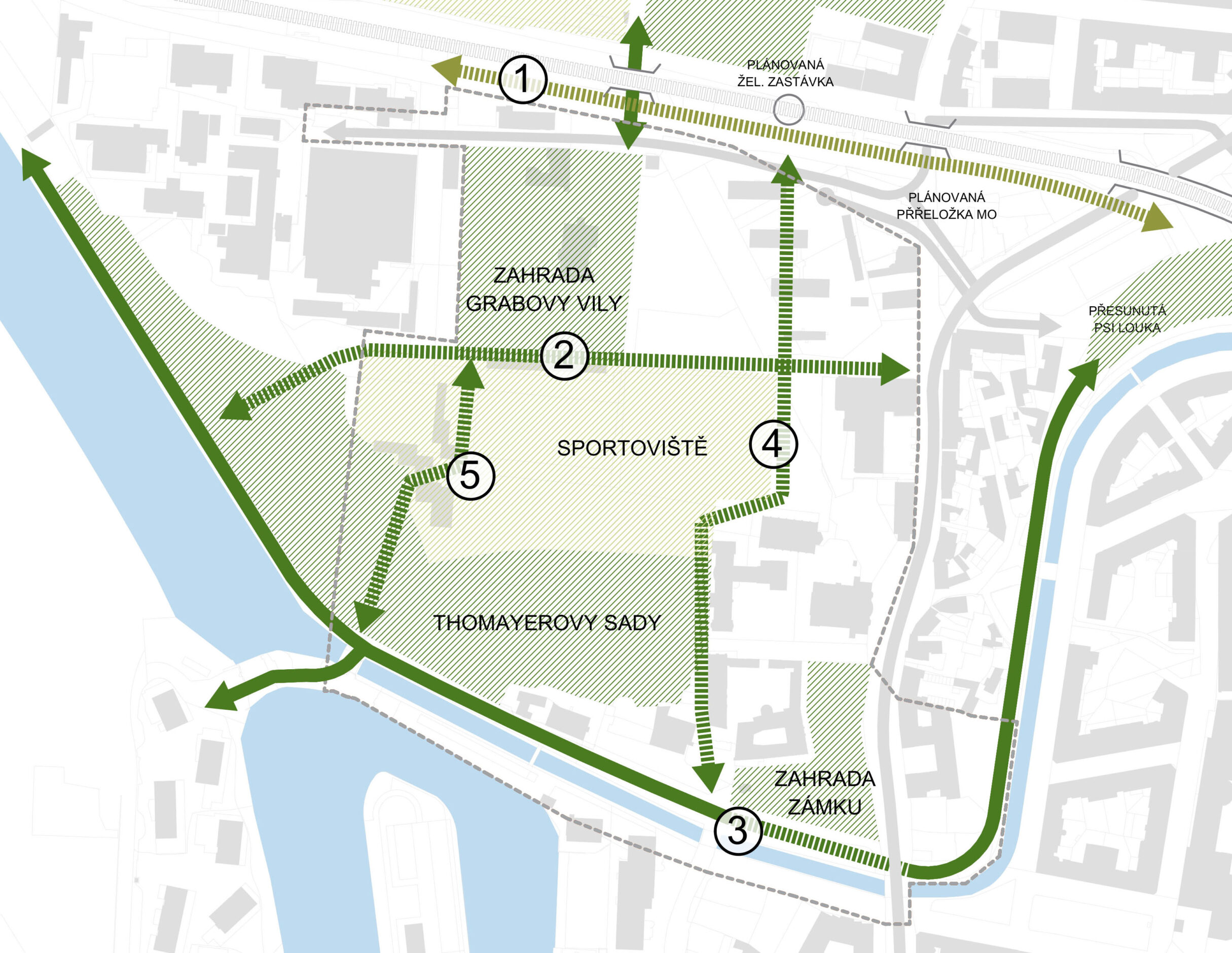 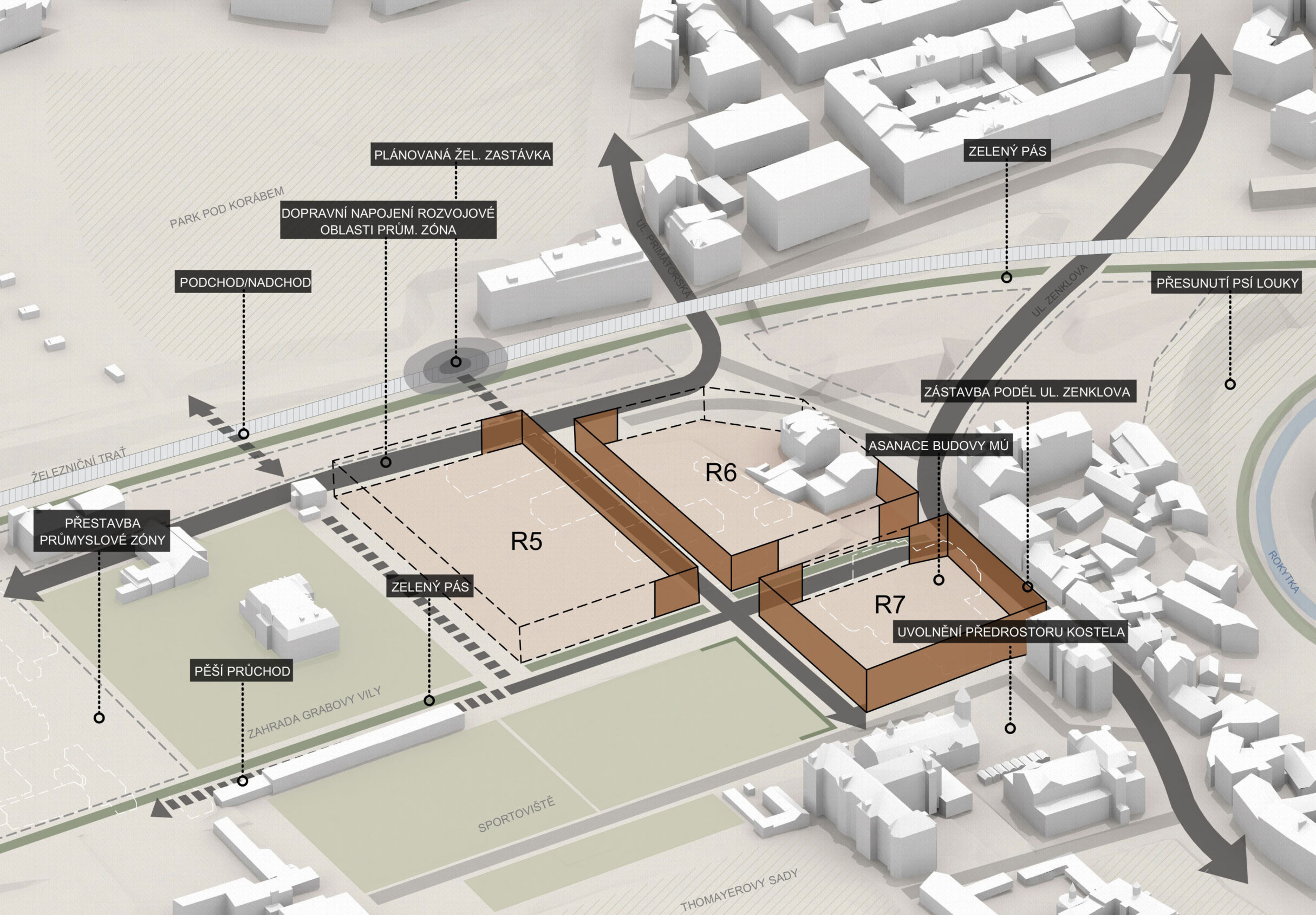 The northern part offers a new axis composed from the planned railway station, a future important place in the area, towards the church of St. Adalbert. It will become an important road in the area that is being offered for reconstruction. We are proposing the remediation of the existing municipal office building. There are several options for its possible relocation, whether into another of the blocks in the northern part of the territory, or within the Elsnicovo Square. The development should keep a solid street edge not only along the new road from the railway station, but also along Zenklova Street. The proposed closure of the space in front of the church leads to the creation and clear definition of its anteroom, to the creation of a representative entrance to the territory. We are proposing the addition of a new pedestrian connection in the southern part of the Grabova Garden, either by simply making it accessible or by moving the southern wall and creating a road for pedestrian or car traffic. Not only will the access to the river be improved, the industrial zone where the future reconstruction is planned will be connected as well. Detailed solutions and verification of the routing of new roads with regard to property relations, terrain configuration, management of the existing technical infrastructure, etc. will be the subject of follow-up territorial studies. 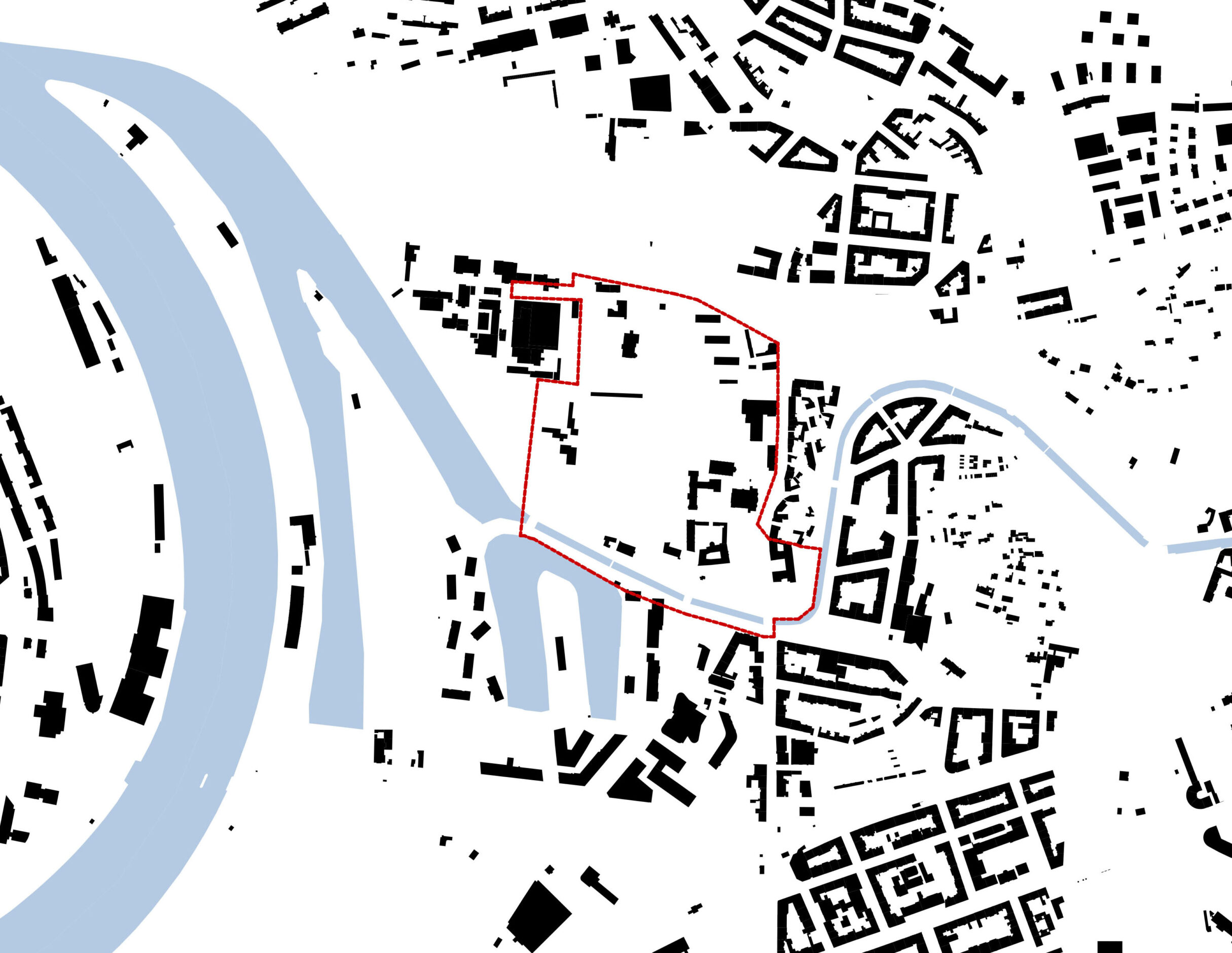