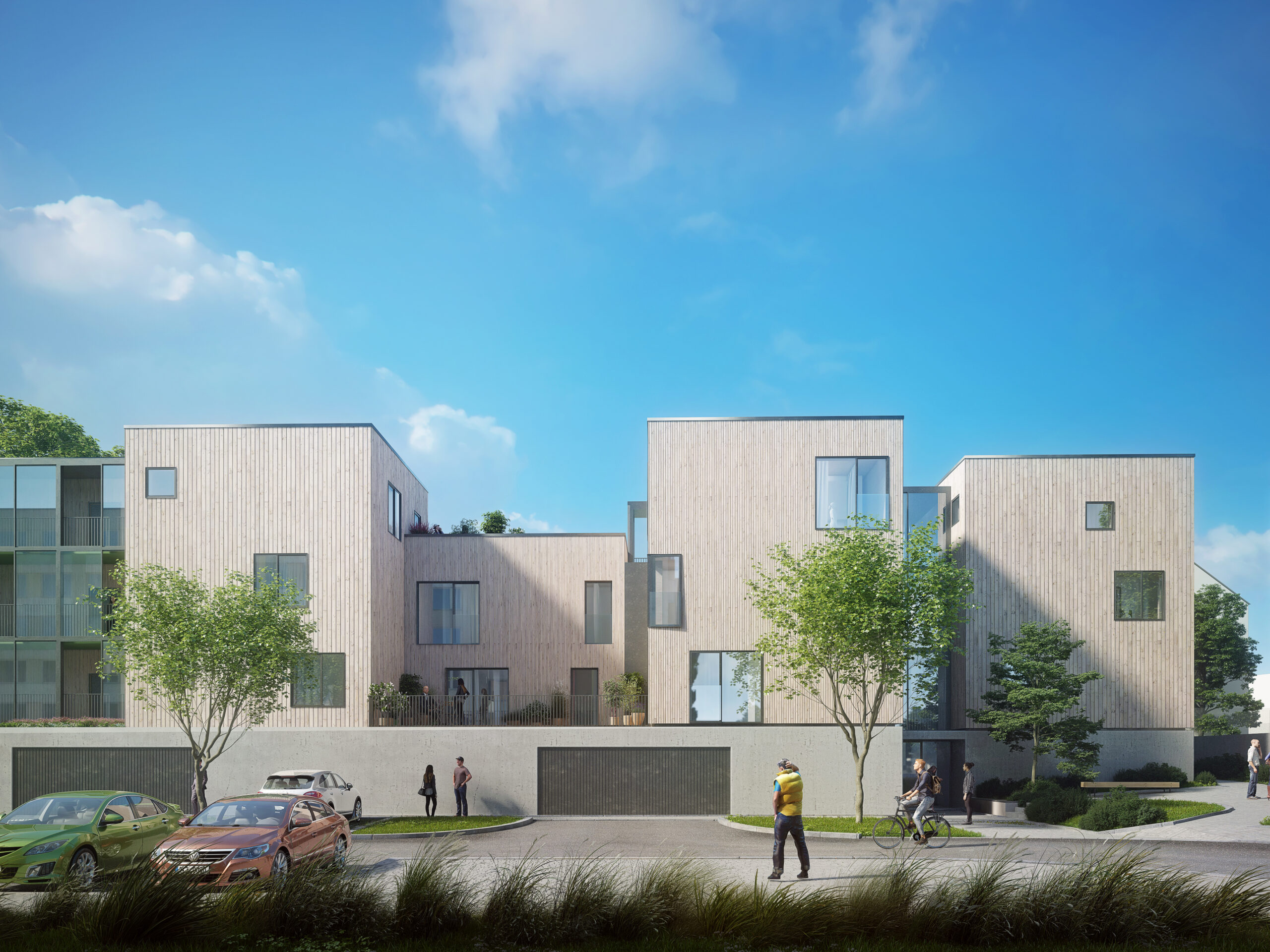 This study was created in connection with the studies “Conceptual study of urban development of the modernist structure Písnice-Libušská”, “Náměstí Písnice – conceptual study” and “Sídliště Písnice – střed”, which were prepared by Pavel Hnilička Architects+Planners in 2018, 2019 and in January 2020.

The study is another step towards the implementation of formulated ideas concerning the northern part of the housing estate. The proposed buildings in Výletní Street are intended for living, they contribute to the diversification of the housing stock of the housing estate and thus to a greater social mix. Urbanistically, a more natural mass gradient is being created between prefabricated houses and small rural buildings, and the quality of public space is improved by new pedestrian roads, small nooks and crannies. The project consists of solitary houses (O-1, O-2 and O-3) and an apartment building (O-4 and O-5). 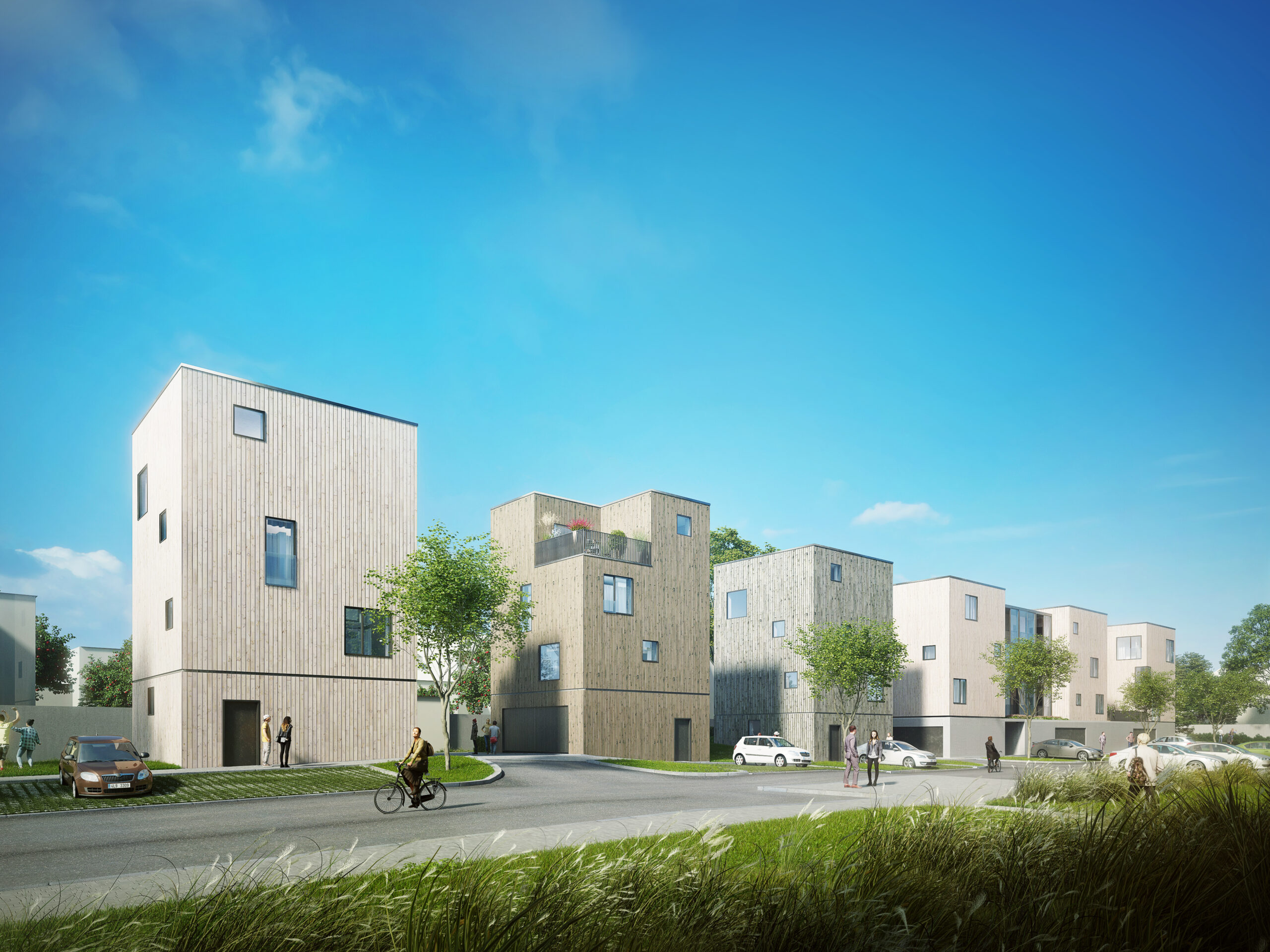 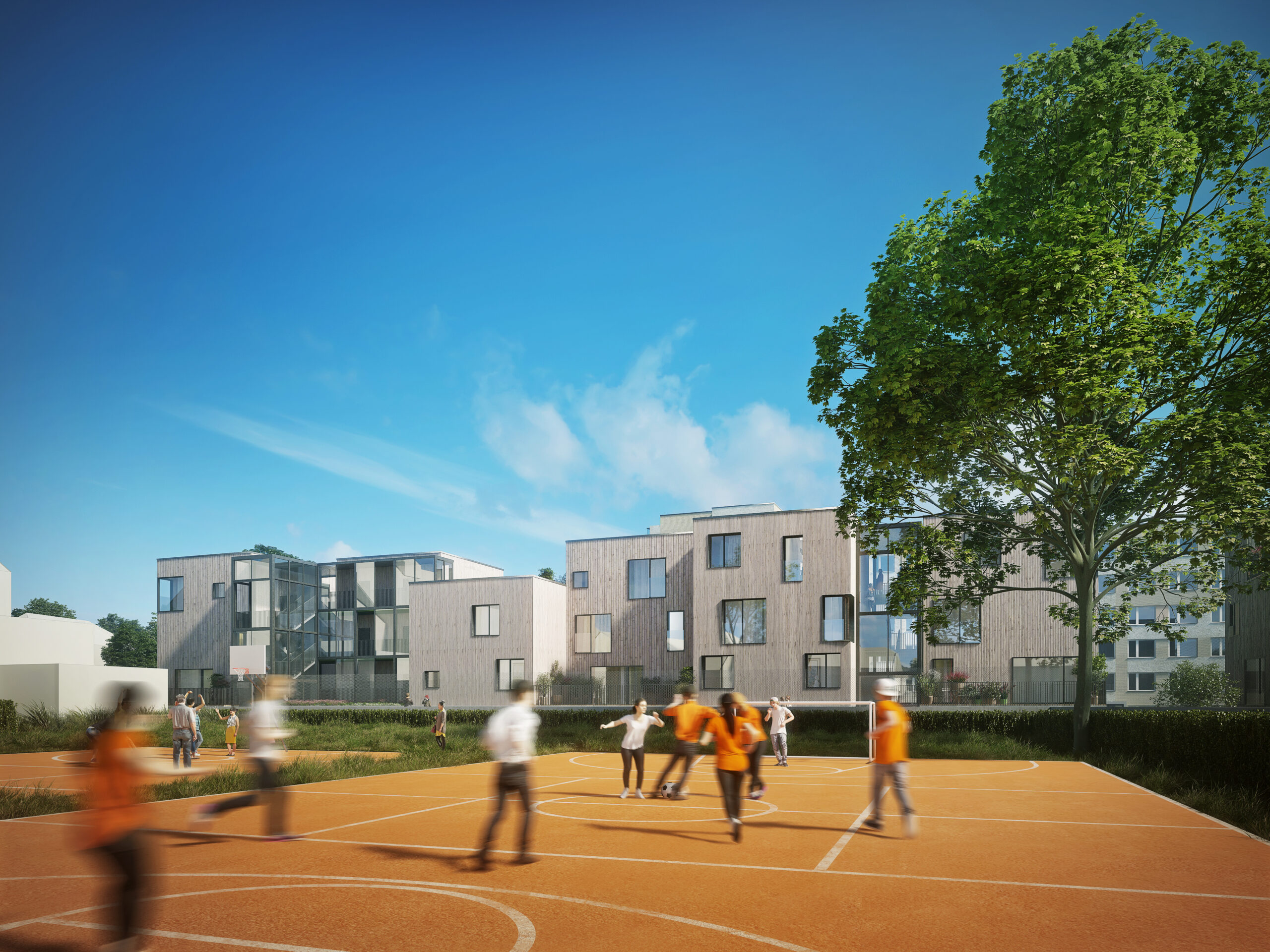 The solved area is located on the very edge of the Písnice housing estate on the north side. It is a plot forming a divide between the mass of a panel housing estate and the original Libuš development of a village character. The building plot of a narrow trapezoidal shape is currently unused and neglected. Due to the lack of infrastructure on the adjacent city land, there was an arbitrary construction of short driveways, sidewalks, etc. without clear concepts and connections, leading through the land owned by CIB. In the western, wider part of the plot there is a transformer station building and a place used for waste bins.

The proposed buildings will complement the existing buildings with a new scale. This will create a gradual height gradient between six-storey panel houses and low-rise deteched houses. Unlike housing estates with long monotonous and impenetrable slabs, we propose to break up the proposed mass into smaller parts, preserving the existing permeability of the territory and enriching the public space with various nooks and crannies. The project consists of 3 separate houses and an apartment building. Both typologies are placed in a mass of "towers" using the same elements. They act as one unit, but at the same time they respond to the context of the plot. The individual masses of the towers are located in the narrow corner of the plot and complement the existing development of solitary buildings. They respect and cultivate existing driveways. 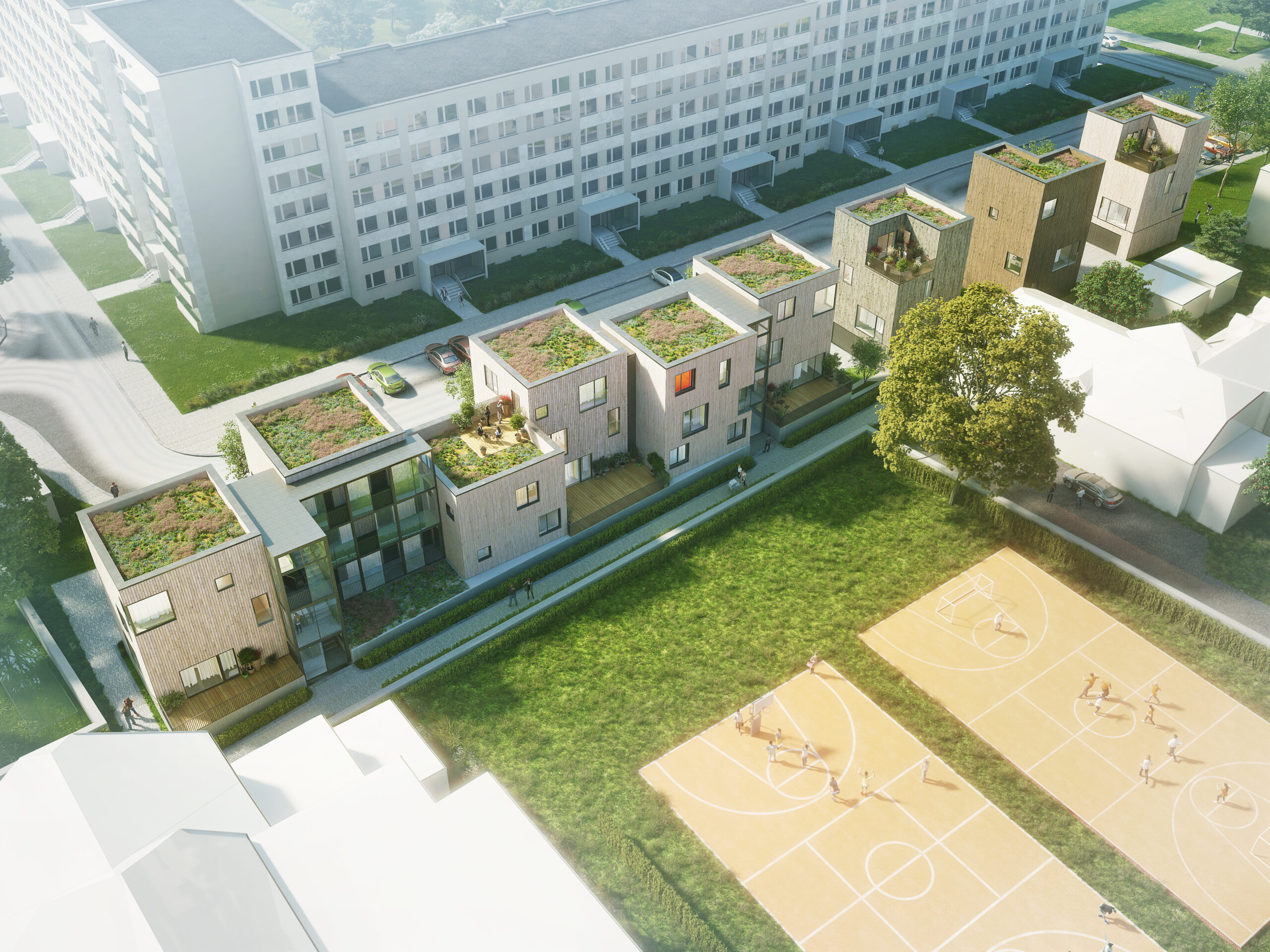 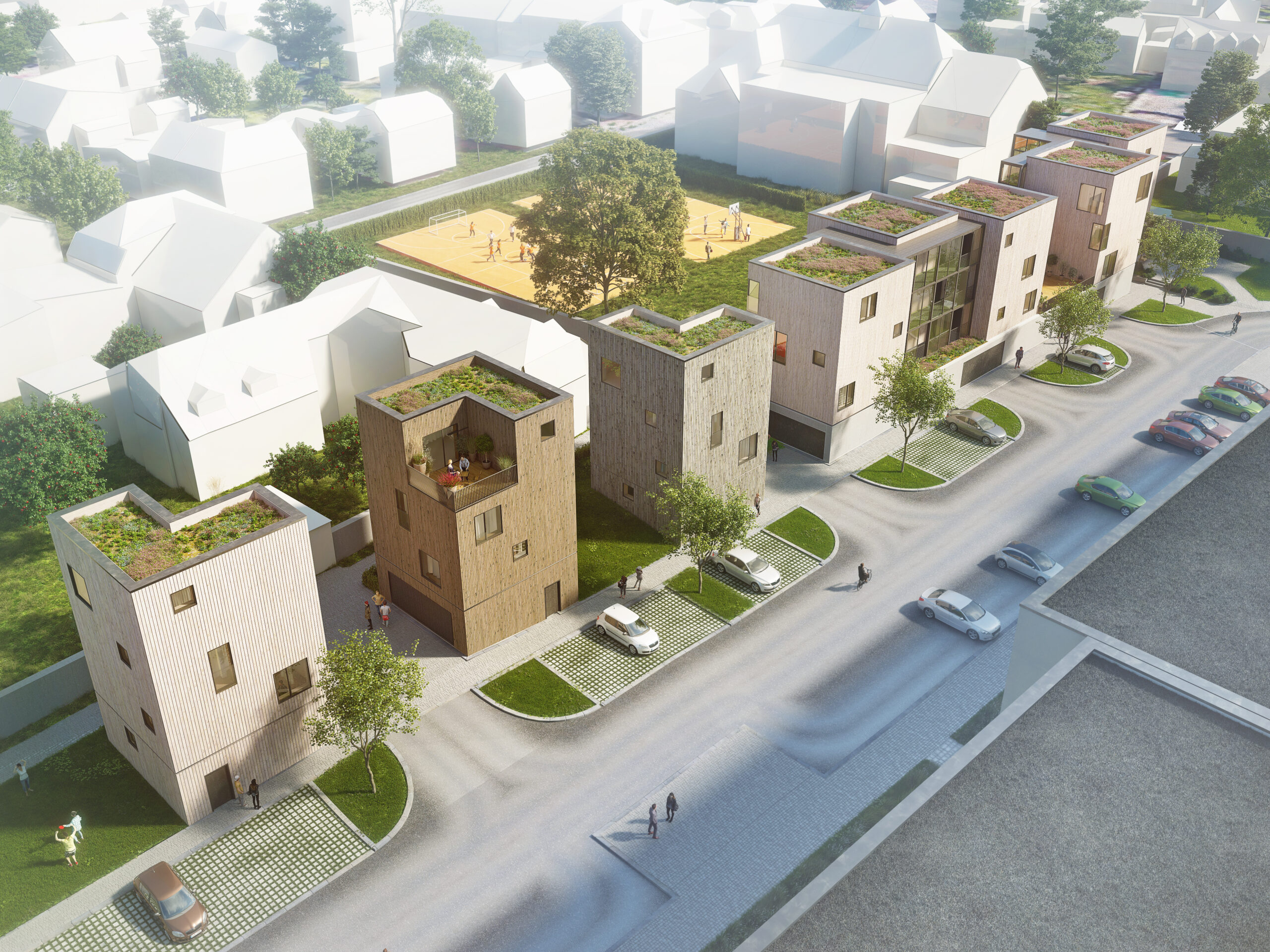 The apartment building is located in a wider part of the property overlooking the open space of the playground. It uses the elevation between Výletní and U Líhní streets, and places the individual masses of the "tower" on a plinth used for garages and entrances to the building. We divide the development into 2 stages. The implementation of the 2nd stage is conditioned by the relocation of the existing transformer station. The communication spaces of the apartment building are formed by simple constructions of unheated balconies, which in winter provide protection against rain and wind, but in summer they can be open and serve as outdoor common areas. The roof of the parking plinth serves as terraces for apartments located on the ground floor of the towers. 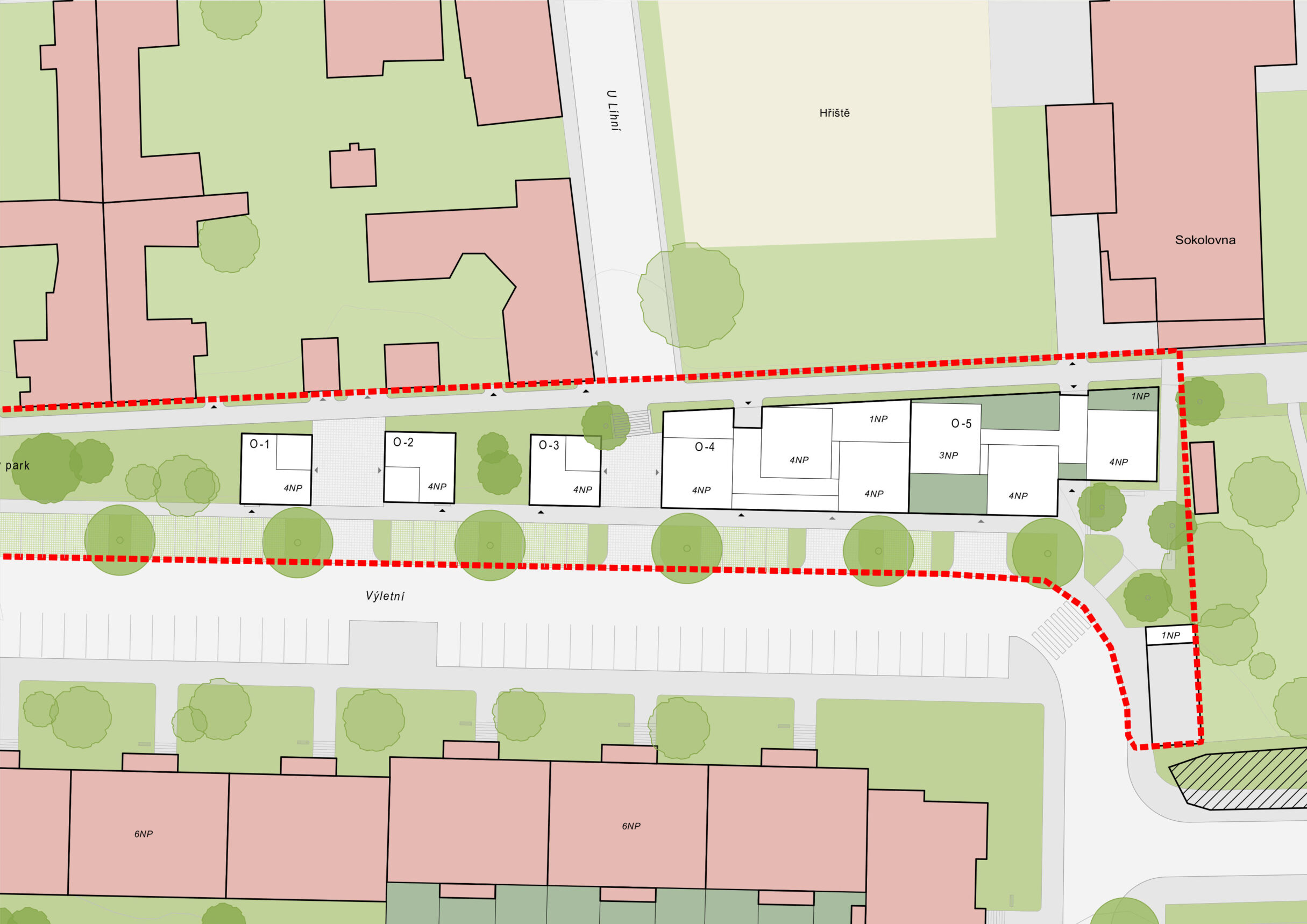 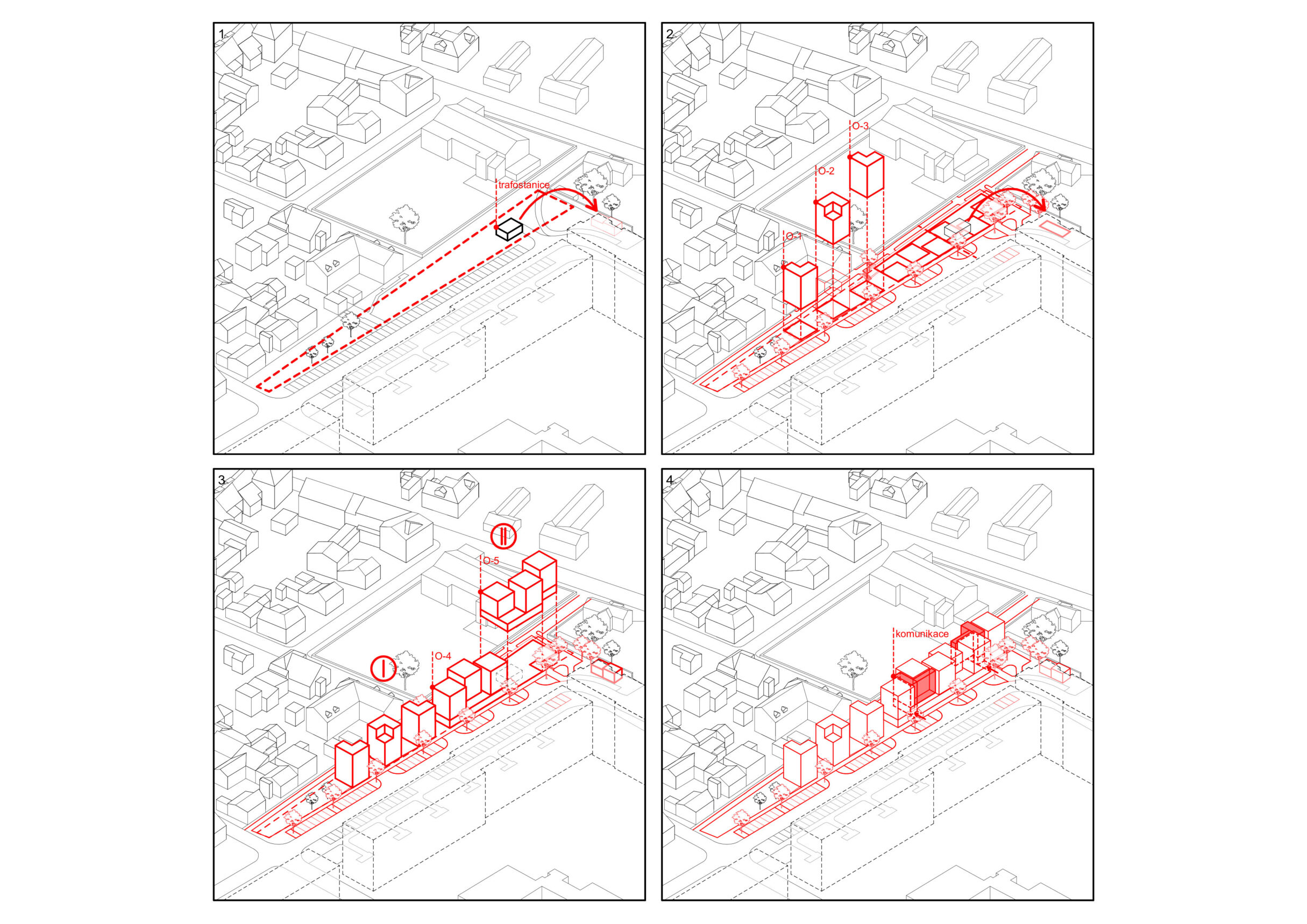 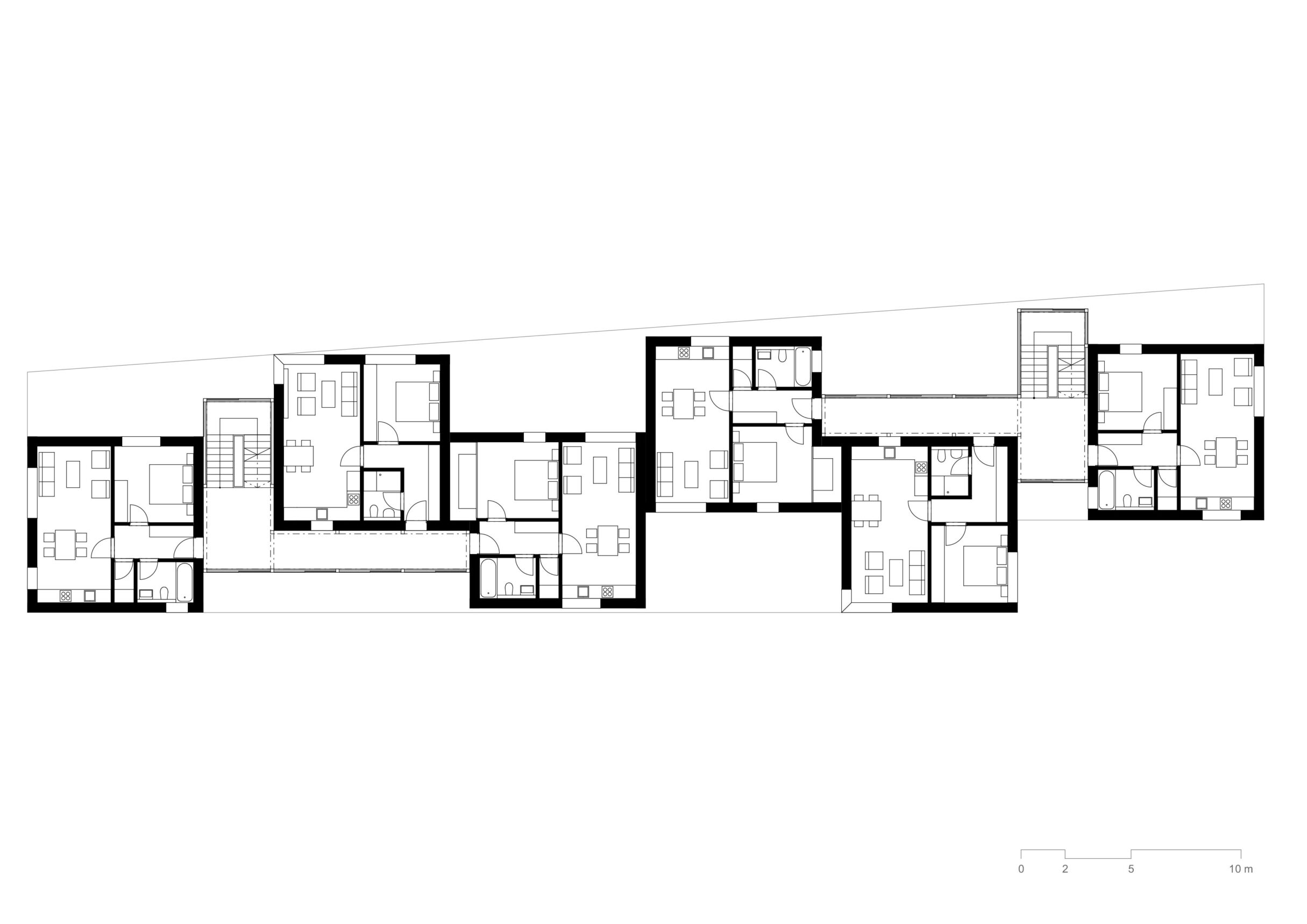 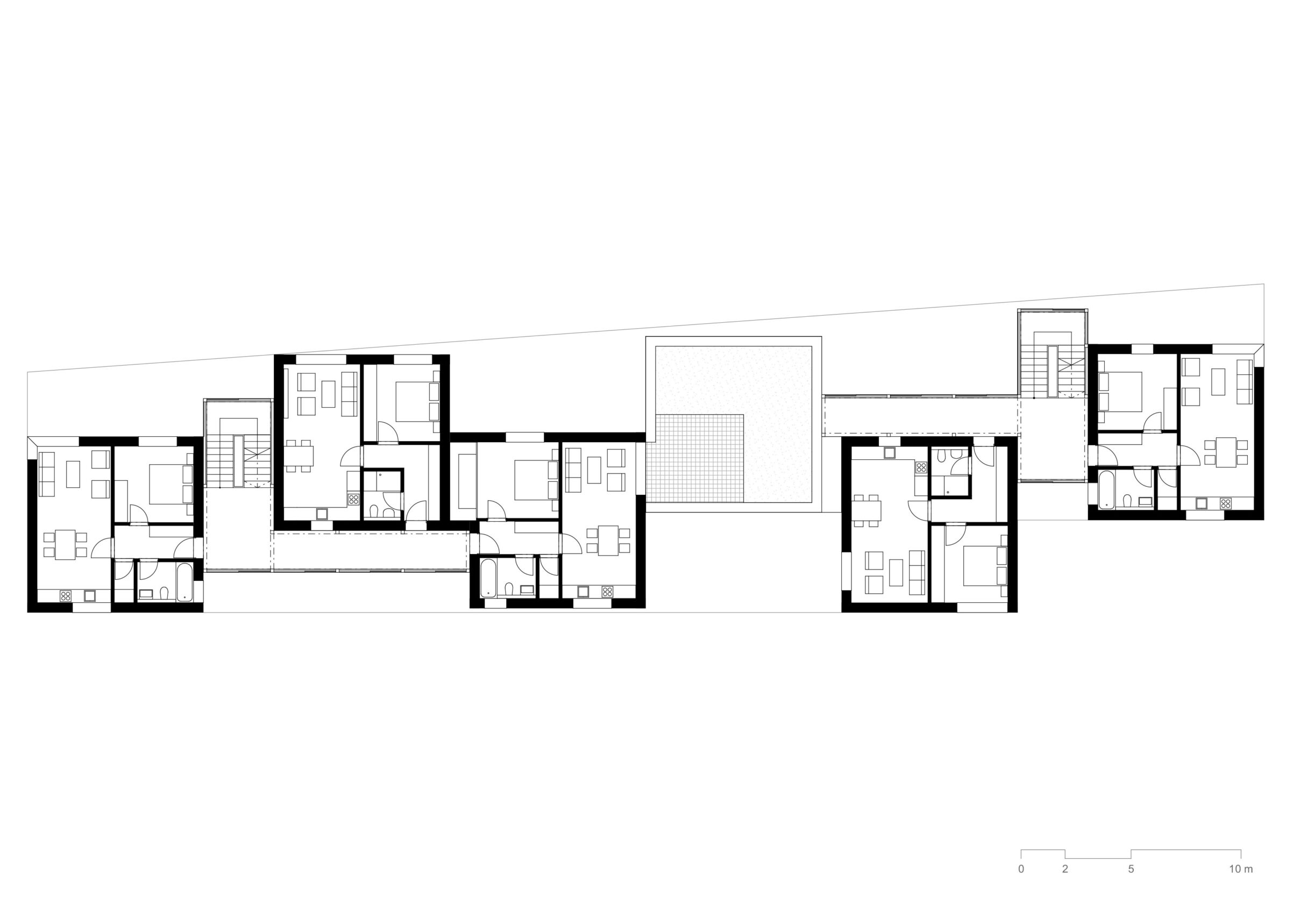 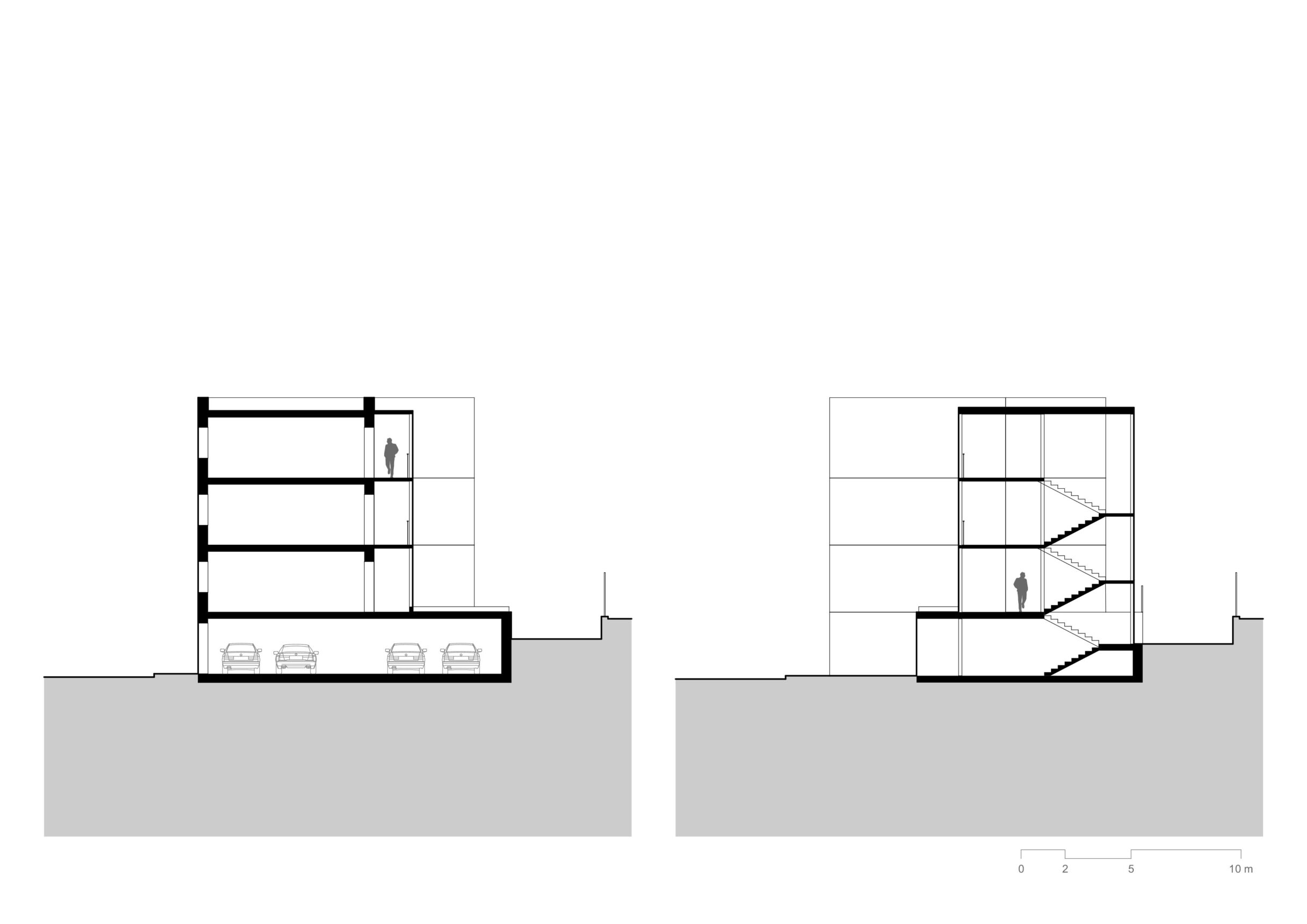 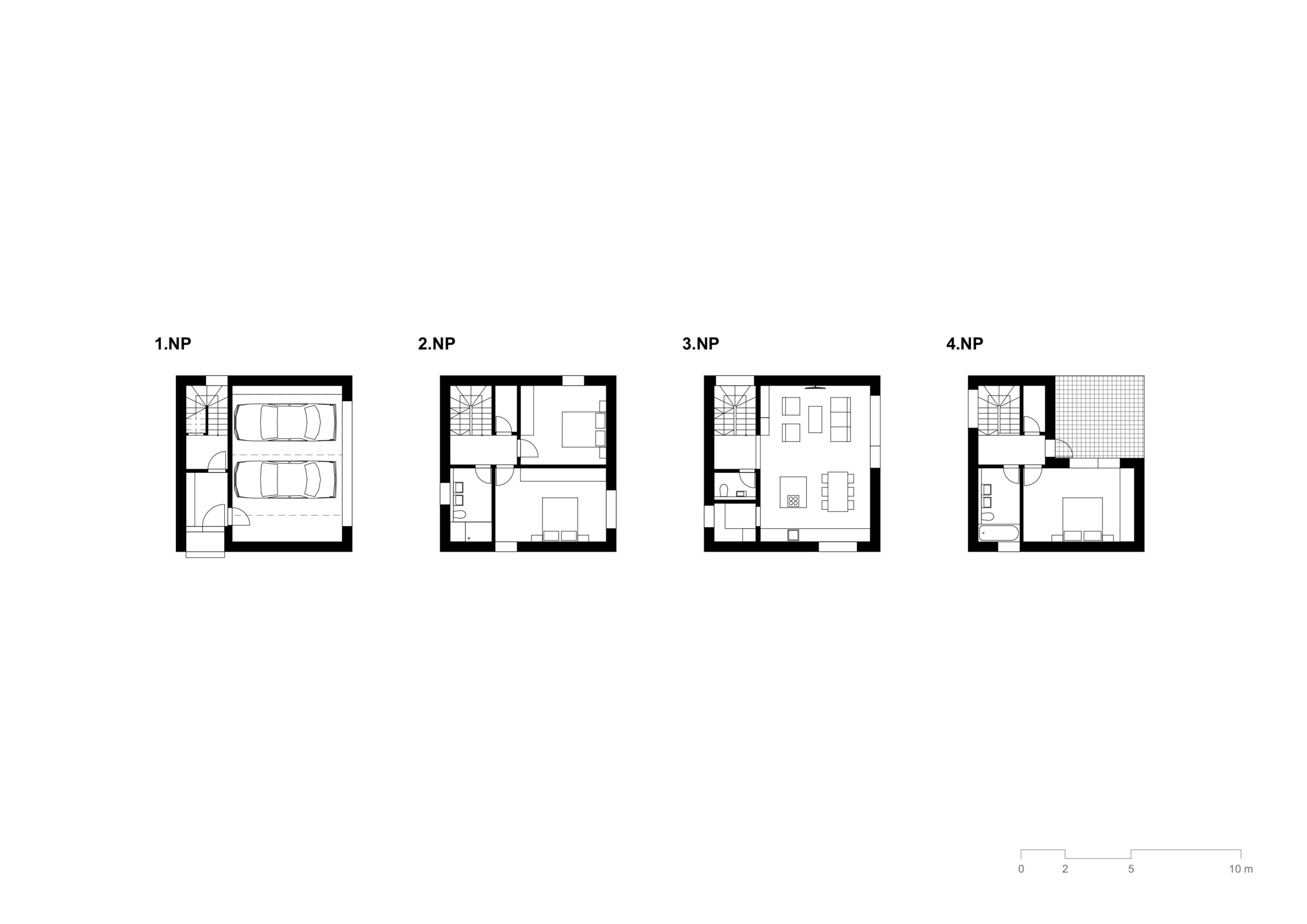 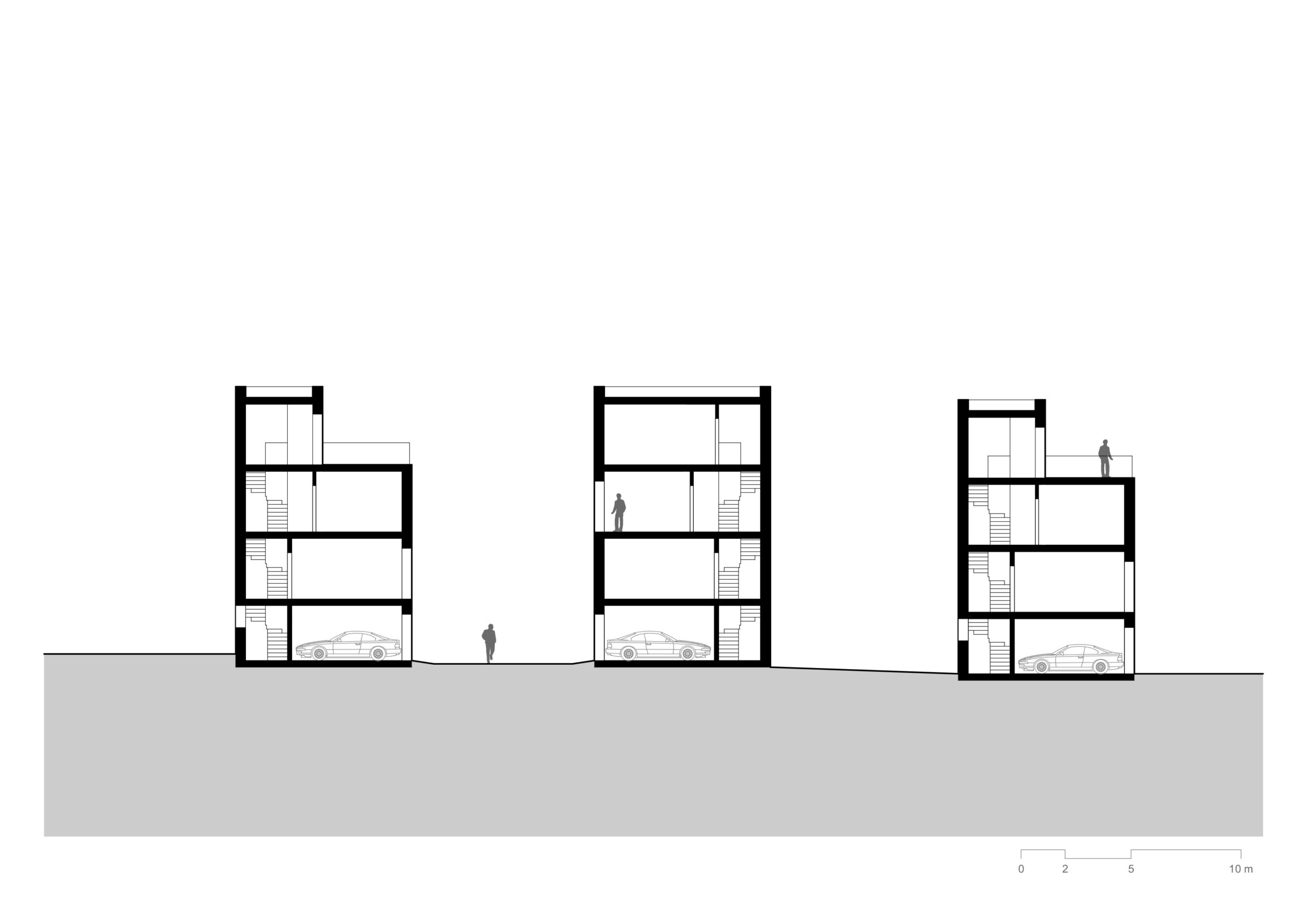